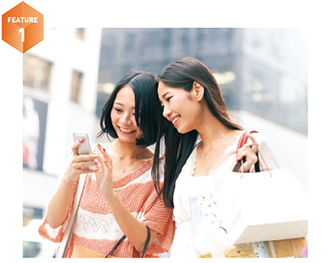 As part of our promotion of the "3M Strategy," in May 2014 we launched "au WALLET," a new platform service aimed at boosting value-added revenues through offline services. As part of our efforts to create new revenue sources to boost value-added revenues, we set up a settlement platform for offline services, such as issuing a prepaid e-money card with a settlement function that enables use in physical shops as well.

On May 21, 2014, we launched the "au WALLET" service as a settlement platform for generating these revenues with the "au ID". An "au ID" serves as an authentication key that allows customers to use various au network services. "au WALLET" acts as a prepaid e-money service with a settlement function for use at physical shops. A tie-up with MasterCard (R) means that "au WALLET" can be used at roughly 38.1 million stores worldwide.

By forging a link with carrier billing, which has extremely high recovery rates, and the added convenience of charging, we have overcome the hurdle of age restrictions associated with credit cards, as well as e-money cards being limited to certain shops. As well as making settlements possible in a wealth of scenarios, the new service enables customers to accumulate points that they can apply toward further purchases, thereby heightening convenience still further.

Meeting demand from customers wanting to use the service for more expensive purchases, in November 2014 we added a credit function, launching the "au WALLET" credit card service.

The settlement business is expected to continue expanding, with transaction volume more than doubling in the fiscal year ending March 31, 2016, to ¥850 billion.

In the fiscal year ended March 31, 2015, value ARPA―value-added revenues sales per au customer―amounted to ¥420. Of this amount, KDDI services such as "au Smart Pass" accounted for ¥310, and settlement commissions from the two settlement platforms ("au Simple Payment" + "au WALLET") the remaining ¥110.

As commission revenues rise in line with higher transaction volumes, we expect value ARPA to grow 19% year on year in the fiscal year ending March 31, 2016, to ¥500. 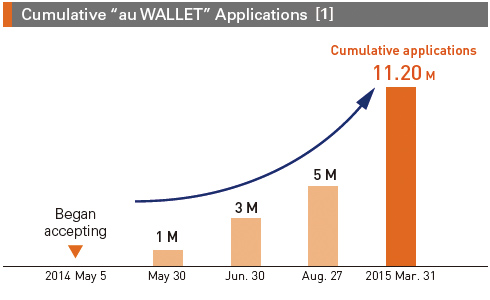 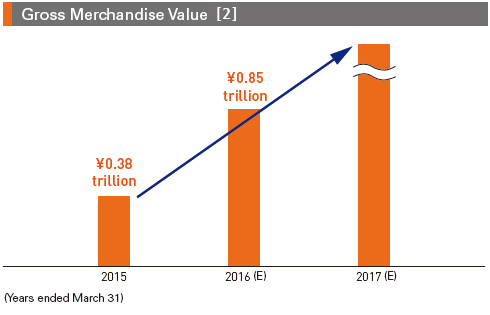 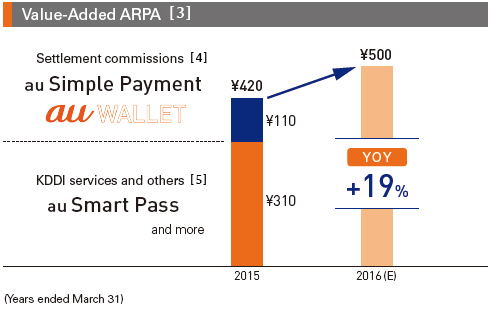