Since the introduction of the plan, smartphone penetration rates have risen, along with the ratio of subscribers choosing fixed-rate voice plans and data plans above 5GB, all of which contributed to boosting au ARPA. 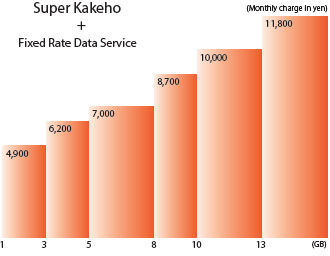 To promote multi-device services, we also offered a strong lineup of tablets, introducing a total of five models, including the iPad Pro and the Qua tab, as well as the mamorino Watch, a children's watch-type mobile phone. 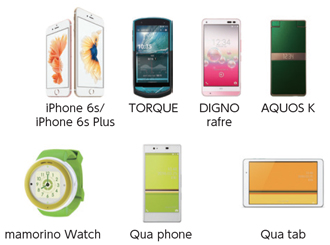 In August 2015, KDDI began a new shopping service, "au WALLET Market" at its au shops, the primary touchpoint connecting au and its customers. The service was subsequently expanded to 2,500 shops nationwide in December 2015.

"au WALLET Market" is a new proposal-style shopping service that enables visitors of au shops of easily make purchases. This offers effective use of customer wait times [8] and enables shop staff to introduce products and subscription items to customers based on their life stages and preferences.

Utilizing its base of approximately 38 million subscribers [9], and by also strengthening its tie-ups with the electricity, financial services and other businesses, KDDI is building a circular model for its "au Economic Zone" centered around au WALLET.

In February 2016, UQ began working to expand its share of the MVNO market by launching a new "Pittari Plan" rate plan, combining communication fees and smartphone handset fees for as little as ¥2,980 a month (excluding tax). In October 2015, it expanded service compatibility with "WiMAX 2+" (TD-LTE), which offers download speeds of up to 220 Mbps [10] nationwide [11], and the service enjoys high customer satisfaction.

As differentiating ourselves from other companies becomes more difficult, enhancing brand value is indispensable for ensuring more of our customers continue to support us. KDDI is advancing efforts to improve the quality of our contact points with all of our customers, not only through our products and services, but in everything such as advertising and customer contact. Among these efforts, in advertising, we were named Brand of the Year in the CM Research Center's 2015 TV Commercial Favorability Ranking, our second consecutive year as the No. 1 preferred commercial, and earning us the Best Advertiser award.

KDDI is engaged in a variety of initiatives intended to ensure that a wide range of customers, from children to seniors, can use our services safely and securely.

In products, we launched the mamorino Watch, Japan's first [12] children's watch-type mobile phone. The watch offers security features that allow parents to confirm the location of their children and prevent them from becoming lost. This is part of our efforts to provide products that both children and their parents can use comfortably and with peace of mind. For "BASIO" a smartphone for seniors, the home screen has an easy-to-see display and dedicated hard buttons are included for the phone and email as part of efforts to ensure this can be easily operable for seniors who are using a smartphone for the first time.

In services, we began offering a Net Skills Diagnostic service, a way of helping children use the internet safely and securely by acquiring knowledge and having the proper environment in place. The service determines a child's internet literacy and offers remedies based on the results.