The Japanese Market and KDDI

KDDI CORPORATION was established in October 2000 through the merger of DDI, KDD and IDO, and has continued to expand its base as a comprehensive telecommunications company with both mobile and fixed-line operations.
While the business has continued to grow with the expansion of the domestic mobile communications market and widespread popularity of smartphones, growth in the domestic telecommunications business, once a key driver, has slowed, and KDDI is working to establish new sources of growth.
Specifically, with its telecommunications business for individual customers and its customer base as its core, KDDI will provide experience value that produces excitement for customers by expanding the concentric circles of the life design business around this core, namely commerce, finance, energy, entertainment and education.
For our corporate customers, meanwhile, we support their digital transformation by assisting them with the creation of new business models, based on the idea that telecommunications services will contribute to their core businesses.
By leveraging the business know-how accumulated in Japan at overseas sites, KDDI aims to create a global ecosystem on a par with the one in Japan.
In the Personal Services segment, KDDI will develop telecommunications and life design services while increasing IDs, mainly in emerging countries in Asia. In the Business Services segment, KDDI will use its IoT World Architecture platform to support the global operations of its customers, with the aim of sustaining growth overseas.

As of March 31, 2019, au mobile subscriptions numbered 55.23 million, up 5.6% year on year and accounting for a 31.5% (+0.5 percentage point) share of the mobile market coverage by Japan's three major carriers.
In addition, unbundled plans offered beginning in July 2017 contributed to reducing churn, and as of March 31, 2019, au mobile subscriptions*1 numbered 24.50 million. Meanwhile, the number of contracts to the MVNO provided by a consolidated subsidiary has increased by 670,000 over the previous year to 2.45 million contracts, increasing the number of "mobile IDs" (the total of au account and MVNO subscriptions) by 1.8% year on year to 26.95 million.
KDDI is aiming to establish a new source of growth in non-telecommunications business fields by maximizing the "au Economic Zone" encompassing such as commerce, finance, energy, entertainment, and education.
The "au Economic Zone gross merchandise value" is the combined value of non-telecommunication services used, along with total payments made through means provided by KDDI ("au Carrier Billing" and "au WALLET"). Approximately 30% of this gross merchandise value is ultimately recorded as "au Economic Zone sales."

As of March 31, 2019, the cumulative number of FTTH subscriptions [2] stood at 4.45 million, up 3.2% year on year and accounting for a market share of 12.5%. In CATV services, the number of RGU households [3] as of March 31, 2019 increased steadily to 5.48 million, up 1.7% year on year.
By cross-selling FTTH and CATV services to the au customer base, we expect the KDDI Group customer base to continue growing stronger and expanding. 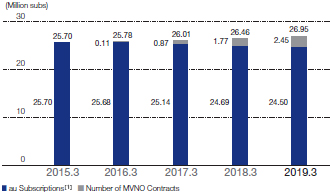 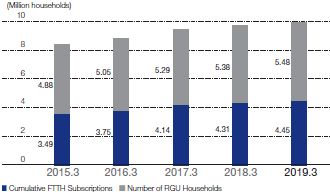 Gross Merchandise Value and Sales of the "au Economic Zone" 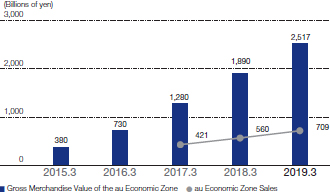 In the IoT business, KDDI aims to create and expand new businesses tied to the platforms of its business partners and KDDI's own 5G/IoT platform, which includes its IoT and ICTrelated technologies and expertise.
KDDI plans to increase the total number of IoT connections from 8 million, as of March 31, 2019, to 18 million by March 31, 2022.
KDDI is aggressively pursuing the use of 5G in regional revitalization as a business opportunity, and has already cooperated with local governments to facilitate their deployment of IoT.
We aim to help solve local issues through collaborative agreements with 63 local governments across the nation to deploy 5G/IoT technologies in various fields. For example, KDDI participated in Reviving the Mackerel: A Project to Streamline Aquaculture in Obama City, Fukui Prefecture, as well as a Japanese sake brewing project with Aizuwakamatsu City, Fukushima Prefecture, and a project to visualize the number of people who climb and descend Mt. Fuji with Gotemba City in Shizuoka Prefecture.